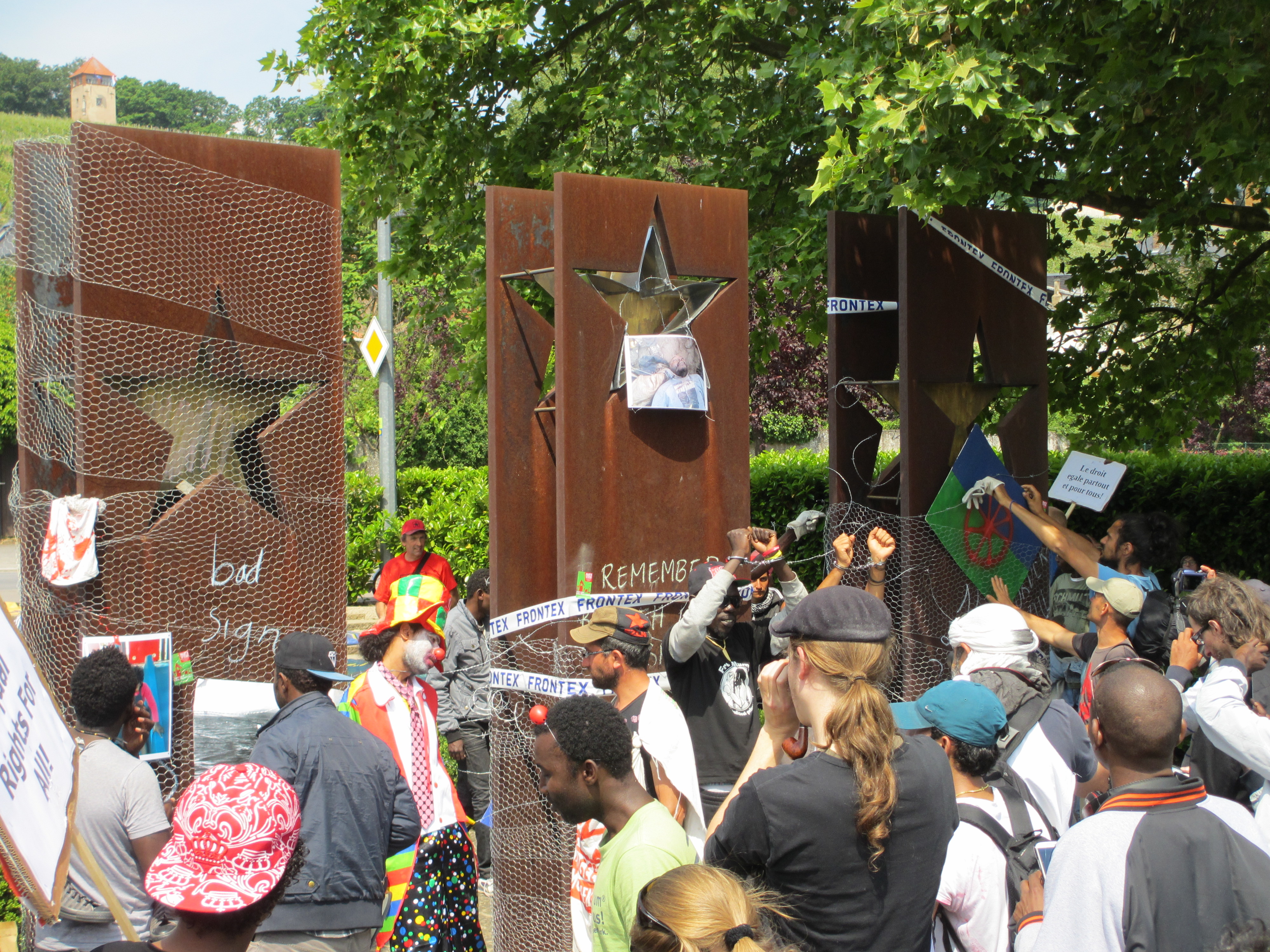 The March for Freedom started yesterday in the morning in the german village Perl with a lot of support to cross the border to Luxemburg. Making photo together, with solibanners from the night before like most of the other days was our first political morning action. From the sleeping place, the gym of the village, the march started with a loud demonstration through the village.

The border in this area is the river Mosel. Schengen is an important symbolic place along the way of the march, because of the Schengen agreement. It gives the citizens of Europe the privilege to cross the borders of the member states without any control, but for non-citizens, refugees, sans-papiers and migrants, it means everything else than freedom of movement.

Before the crossing  the bridge, there was a press conference. Some activists made clear why they participate in the March For Freedom. The restriction of movement, capitalism, racism and the deaths in the mediteranean sea, caused by fortress Europe, were the main topics.

To make visible the danger that a lot of people have to face to reach the coasts of europe, some of the refugee activists crossed the river by boat or jumped out of the boat and swam to the other side. Bloody they reached Schengen, at the point where the heads of the european states left the luxury boat after signing the agreement in 1990.

The three columns which inform about the history of the agreement got redecorated to show the brutal reality of its affects.
After a while the demonstration continued untill it reached the Schengen museum. A museum which also deals with the story of Frontex. The tunesian delegation, which is participating in the march for freedom, made an exibition with pictures and long lists of names of the ones who are missing and the ones who died in the sea or in the hands of the european authorities. A group which occupied the roof of the museum hang up a banner asking: „Frontex. Où sont nos enfans?“ (Frontex, where are our children?) and another banner stating „Frontex kills“.
On the way along the river an exibition showed the terrible situation for refugees in Greece.

The afternoon ended with food and a cultural programm, then the march continued for the last 4 km to the sleeping place in Remerschen.
The whole day the police was almost not visible and also didn‘t react repressively against any action. Until now the march didn‘t have any serious problems with border crossing, but still there is another border to cross on the way to Brussels. On the 6th of June the march will enter Belgium. Since the G7 summit takes place on the 4th and 5th of June in Brussels, Belgium has announced that they will make restrictive border controls from the 1st to 6th of June.

The leaders of the seven most dominant capitalist nations don‘t like to be disturbed when they make their dirty business.

As the biggest consumers of resources and energy in the world and leaders in production of weapons, they want to avoid seeing the victims of their policies.

„We are here, because you destroy our countries.“

The march will continue, and the goal is to reach Brussels. The fight will go on until it is impossible to ignore the voices of people who get victimised by capitalism, rulership, racism and wars.

No border crossing is illegal!
March For Freedom

On the 13th day of the Protest March we will reach the city Schengen through our third border crossing from Germany to Luxembourg.
After the press conference at 11 am we will cross the bridge from Perl to Schengen to start our action in this symbolic city for racist asylum and migration policies.

Schengen is the city in which the Schengen Treaty was signed. In Schengen the EU is celebrating freedom of movement and „Europe without borders“ as well as FRONTEX. It is celebrating the privileges of the European citizens while criminalizing migration.Therefore the Schengen Treaty on the other hand means the establishment of Fortress Europe, migrant defence and deaths at the borders of Europe and its seas as well the violation of human rights.

We call all refugees and solidarious groups to join us in Perl to cross the border together to reach Schengen. Through creative actions we want to celebrate there the freedom of movement for EVERYONE and at the same time we want to scandalize the killing militarization of Schengen’s outer borders. We want to abolish Frontex, the Dublin System and all anti-migration policies of Europe.

Let’s come there together and smash borders and racism!!

Interconnected Refugee & Migrant Movements –
Protest March against Fortress Europe!
From Strasbourg to Brussels, May and June 2014

The European council and the European ministers of foreign affairs make
racist and prohibitive policies against refugees and migrants on a very
high level. In reaction to the recent admitted mass drowning in the
Mediterranean, they only concluded to arm the forces that control and
aggressively prevent people’s movement, such as frontex. They will hold
their next summit at the 26th and 27th of June in Brussels.

Different groups of refugee and Migrant movements in Europe plan a protest march
from Strasbourg to Brussels. This will begin shortly before the European
parliament elections at the end of May. The marching refugee and supporting
activists will walk about 450 km within one month. In an action week before
the council’s summit, we will raise our protest against the policies of
fortress Europe!

A group of people active in and supportive of the Refugee Movement
from Oranienplatz have started to mobilize for the march and prepare the
action. We would be happy about many different kinds of support:

For any questions or ideas, proposals or information you can reach us
via email: freedomnotfrontex@riseup.net or meet us almost every Sunday at
3 pm at Cafe Kotti in Berlin/Kreuzberg, just ask at the counter for us.

Thanks a lot and see you on the street!!!

We come from everywhere – to march from Strasbourg to Bruessels. May & June 2014

We are asylum seekers, refugees, undocumented migrants, migrants from many European countries, we are Europeans with a “migration background”, we are all those who have no full priviledge of citizenship, but also citizens who share a common anger against the racist EU migration policy.

We decided to organize a European caravan which will go from the largest number of European countries towards Brussels (Belgium), where the European institutions are settled. Showing that we don’t respect the borders they impose us, holding us prisonners of the states borders and in the lagers, we will exercise our basic right of freedom of movement and adress our demands directly where the decisions come from.

We have a dream: